A brief comparison between Canon’s flagship speedlite 600EX-RT speedlite with third party competitor, Yongnuo’s YN600EX-RT speedlite. By the sound of the brand YONGNUO, the first impression might not be good. I myself did not bother to look into the products by this brand until I saw my fellow photographer friends using multiple flash units from Yongnuo for location work. Another most important factor is the very identical appearance of Yongnuo  products with Canon’s flashes.

My immediate reaction was to research more into this brand as I was planning to upgrade my kit and get back into strobist photography. After some research I decided to buy the top range flashes, the YONGNUO YN600EX-RT speedlite and the Yongnuo YN-E3-RT transmitter. This is the latest release and the top of the range flash by Yongnuo to work with Canon speedlite system. Yongnuo have previous models which are also exact versions of the original canon speedlites.

More details on Yongnuo YN600EX-RT speedlite can be found on Yongnuo website at the following link:  http://www.hkyongnuo.com/e-detaily.php?ID=351

More details on Yongnuo YN-E3-RT transmitter can be found on Yongnuo website at the following link: http://www.hkyongnuo.com/e-detaily.php?ID=337

NOTE : SKIP TO THE END TO SEE THE ADVANTAGE OF USING SPEEDLITES.

The speedlite and transmitter are very well packaged. The boxes are strong for this premium range flash kit. The speedlite comes in a bubble wrap inside original Yongnuo Case for speedlite, exactly identical to Canon’s cover for 600Ex-RT speedlite.

In a side by side comparison you will not be able to tell the difference, the Canon transmitter cover has canon tag on the side of the cover, Yongnuo does not have a tag. The cover interior gives away the quality of the fabric used. It is a tad lower quality than the original, but feels as strong as the canon version.

The Yongnuo transmitter is slightly bigger than the Canon’s Radio Transmitter. Almost identical copy of the original transmitter. The original has 2.5mm jack port on the side where as Yongnuo has mini USB port, convenient for the future firmware upgrades.

Menu system is same as original Canon transmitter.  Yongnuo’s transmitter operates flawelesly with Yongnuo radio flashes and canon’s RT flashes. All the functions and features are exactly same as canon. One who can operate Canon’s ST-E3-RT transmitter, will feel no difference in operating the unit apart from the physical buttons which needs a tad push harder to operate. But works fine without any problems.

AF-BEAM  is a nice addition to the Yongnuo transmitter where as Canon transmitter does not have an assisted focus beam on the unit itself.

Optical-Infrared transmitter is another feature that is also plus feature on Yongnuo RT transmitter which gives them advantage over Canon transmitter.

LINKED SHOT is a great feature offered by both brands. In this mode you can trigger multiple cameras (upto 15) at once using just one camera as a master trigger. Brilliant for creating some interesting shots of same  scene from different angles. You can also use the transmitter as Master trigger and Canon’s 600Ex-RT speedlites or Yongnuo YN600EX-RT speedlites as  in slave LINKED Mode to act as slave triggers. In this mode you can have the flashes fire or not fire.

Yongnuo Speedlites have become very famous amongst serious strobist photographers. YN600EX-RT speedlites are the latest ones and the top of the range in both Canon category and Yongnuo range as well. These are the only models which have built-In radio triggers.

The Yongnuo YN600EX-RT and Canon 600EX-RT both have same features and built quality and appearance. There is literally no difference in appearance apart from the brand names.

Menu system on both units are exactly same.

AF ASSIT BEAM is present in both units. However the light pattern emitted by Yongnuo speedlites are different compared to Canon speedlite. Due to its smaller area coverage it sometimes finds it harder to focus.

LINKED SHOT is present in the Canon’s RT speedlite but lacks the feature in Yongnmuo to be used as slave unit on LINKED mode. This feature is purely firmware based, so I presume in near future the first firmware upgrade for this unit will bring a lot of features and improvement to the unit. At the time of writing this post I have not found any problems so far with the units. 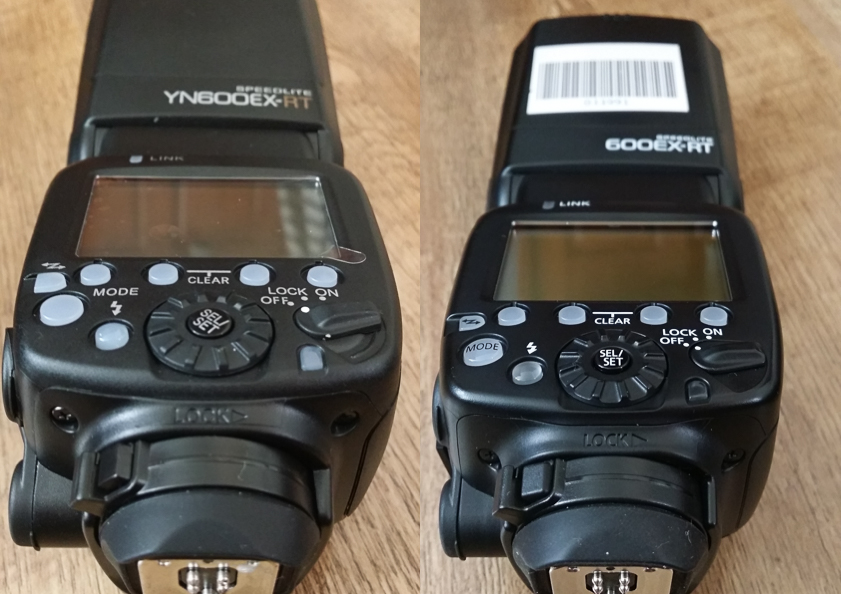 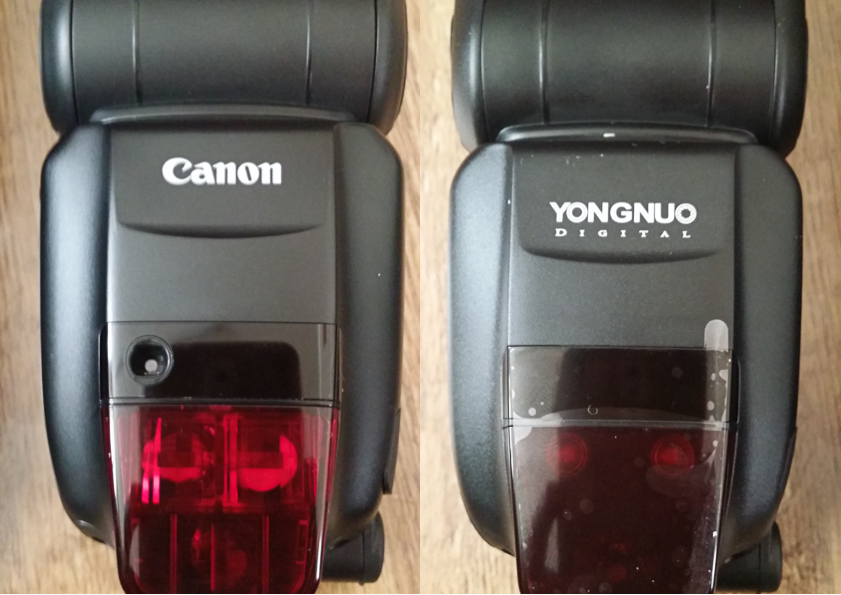 Build quality of both units are same. Canon has locking buttons on the side of the head unit to unlock for rotationg the unit to 360 degrees, where as Yongnuo unit does not have locking buttons instead it is very stiff but with little force the head can be rotated 360 degrees.

The battery compartments on both units are same. No difference there at all. On the other side of the head, the ports are same except one port. Yongnuo has mini USB port to give extra feature of upgrading future firmwares via internet using pc or mac. Canon does not have this feature, instead it had a 2.5mm port.

The covers from both brands are pretty much same in appearance and in fabric choice. Both brands have their own brand tags on their covers. 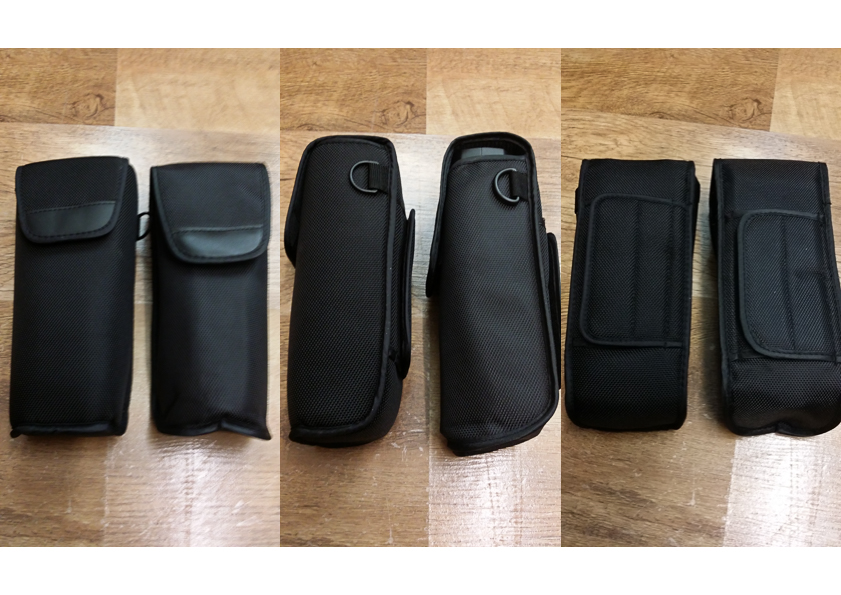 One special feature which is not available on Yongnuo speedlites is the small photocells near the light unit. These two little photocells help in adjusting the Canon’s color temperature when a certain gel is put on the head unit within a specially designed adapter by Canon.

Advantages of using speedlites on Location

There are many advantages of using speedlites for location work. It can also be useful indoor for portrait, fashion, editorial etc. You just have to spend some time practicing your kit to get use to it and master to control the light with your speedlites. The surely requires a lot of practising with speedlites. The light from speedlite is different compared to most location lighting kits offered by top brands. They all have advantages.

Using Monolights it is the limitation of shutter sync speed of 1/250 maximum supported by most of the cameras. On the contrary the speedlites are designed to communicate directly with shutter, aperture, iso and color temperatures, it is possible to use high shutter speeds of upto 1/8000.

This gives us possibility to use creative aperture values to bring shallow depth of field in the composition with lighting and control the ambient light with high shutter speeds. This is something not possible with monolights at the time of writing this article. As the technology is moving, I am sure, in very near future there will be monolights capable of syncing at higher shutter speeds.

The above series of shots were taken with handheld camera and handheld speedlite for quick test of off camera flash with high shutter speed and large aperture of f/1.4

The test was done to show shallow depth of field can be achieved with wide open aperture in full manual camera mode.

My personal opinion from my own experience, the Yongnuo YN600EX-RT kit looks very promising and will going to be a famous units to have. The attractive price tag will surely make this unit a very popular product amongst serious strobists upcoming strobists which are not going cut a hole in your pockets.

Even though this particular model YN600EX-RT was only released in October 2014, 3 months ago at the time of writing this post, there are possible firmware updates available anytime soon. There are not many detailed reviews on this particular speedlite net at the time of writing this article. I am sure who ever got hold of this unit is going through tests and will be posting a more detailed reviews which can be really helpful.

As will I be doing a lot of testing with my new kit and will be posting new techniques and features Yongnuo has to offer in their new speedlite.

Price tag of this unit makes this item very tempting for photographers who love to use speedlites for their work on location or studio. It is going to challenge Canon’s pricing strategy globally. Yongnuo YN600EX-RT Speedlite at £130 and Yongnuo YN-E3-RT transmitter at £59.99 selling on eBay including shipping from London, this kit is surely a winner in the range.